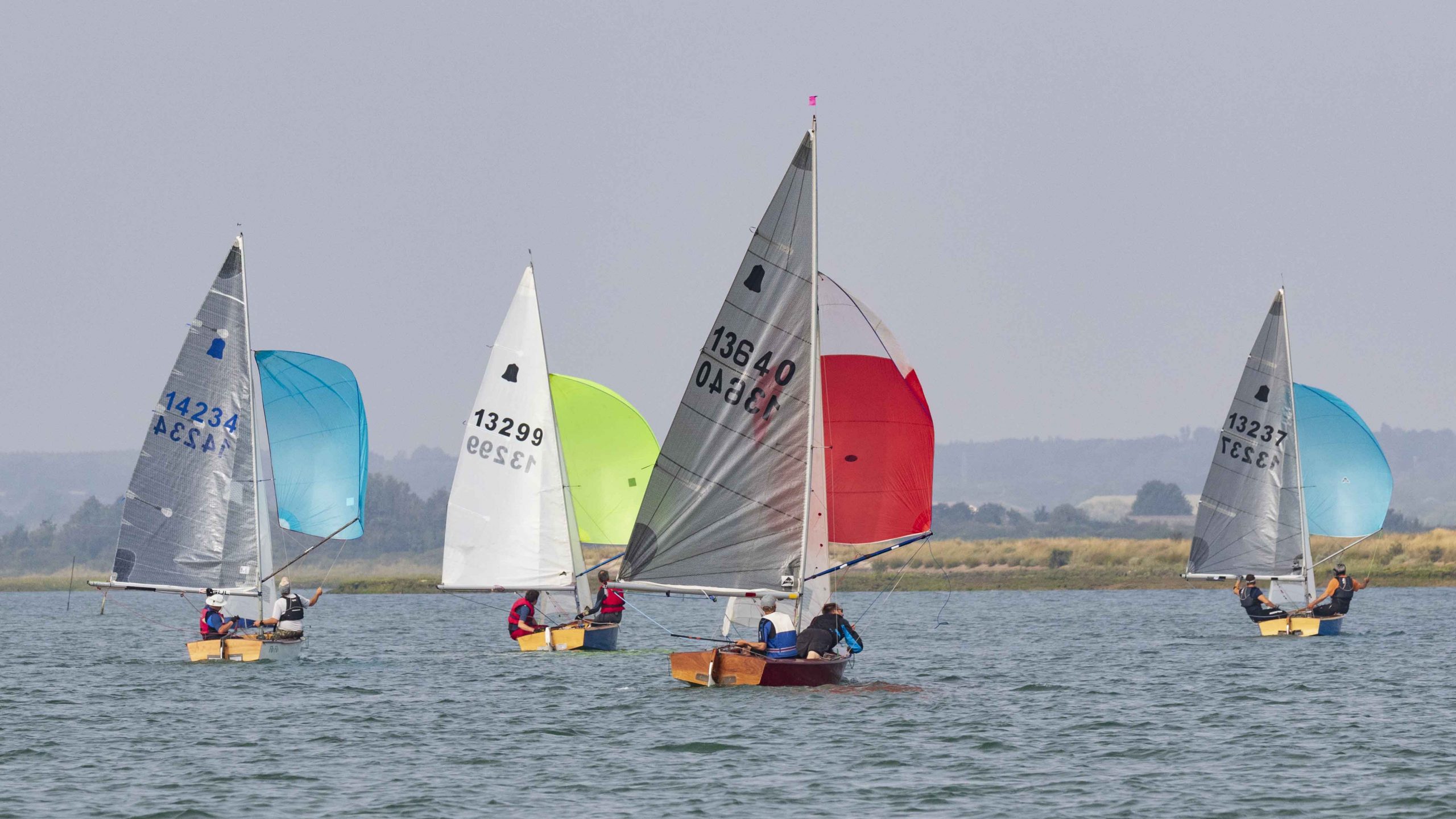 The eighth round of the London and South East GP14 Travellers series was held at Tollesbury SC in Essex on the 5th September. The fleet of 18 boats (7 travellers and 11 from the home club) enjoyed superb weather – bright sunshine and a steadily building 10 to 12 knot easterly breeze. RO Richard Ham set a long beat into the tide down the North Channel towards the main Blackwater estuary against the flood tide leading to a lot of close tacking over the shallows. Flat water and a slightly stronger breeze allowed Cooper/ Barrie (Welsh Harp) and Rogers/ Wilkinson (Tollesbury) to break clear on the left hand side and they were not challenged down wind or on the second lap. In the second race with a similar beat Rogers/Wilkinson using what they thought was local knowledge and initially led staying to the left along the seawall, however, the wind veered as predicted and Cooper/Barrie and Keith and Lucy Street (Welsh Harp) were first and second at the windward mark with Rogers/Wilkinson regaining second place as the fleet got close to “Joyces Head” with Tomasz Szakola and Maciej (Magic) Matjaszczuk/Anna Holford close behind.
The start of the third race was problematic with a now ebbing tide which made judging the approach to the line very difficult. After two general recalls the race finally got away with the RO demonstrating his intent with a black flag that looked suspiciously like a black sweater tied to the flag halyard. With a shorter beat into the South channel Keith and Lucy Street led at the mark closely followed by Paul Trubridge (Frensham) with local crew Bob Gaskell and a large group of about six boats rounding in a gaggle just behind fighting for third. Innes/ Mcguinness (Frensham) grabbed a late overlap allowing them to roll the group coming through to third at the leeward mark and the race finished in that order
Everyone was most appreciative of the food and refreshments laid on by the club`s excellent shore team and thanks were duly offered to what is truly one of the friendliest clubs on the East Coast. After the prizegiving “Magic” conducted an impromptu spinnaker training session for several local crews which was really useful and greatly appreciated(and much needed!!)
The GP14 Southern Travellers now move on to Hampton SC,Welsh Harp andconcluding at Frensham Pond. Contact David Innes on innesd142.0@yahoo.com for details.