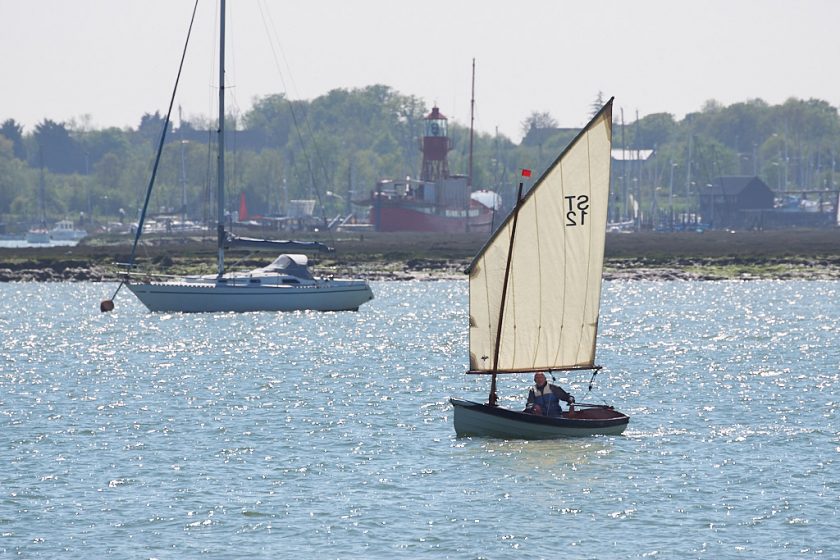 The 5th May saw the annual OGA vs TSC race. As usual we tried to make this a two day event but as usual we failed.

OGA numbers were down with many regulars having other commitments. Those who did come had other things they had to do on the Sunday.

But we had the largest TSC turnout we can remember which made for an excellent race.

Orkney 12 Bonny and Padstow Lugger Tiki are both TSC and OGA boats so we had 8 TSC and 8 OGA for a total of 14!

The weather was gorgeous with sunshine, blue skies and a light easterly breeze which filled in a little by the time we had enough water to launch.

There wasn’t enough wind for the OGA boats to do a long course so we did a short one and the faster boats did two circuits.

For once there were no incidents on the water and little of note to award a seamanship trophy for, so it went to Rory Howlett for his excellent care of 3-year old Henry.

Line honours went to Papa Little, not surprising considering she used her topsail, spinnaker and sported a trapeze! We had to handicap her differently to a normal Wayfarer which gave TSC GP14 Fancy Pants the first prize.

As usual we did the prize-giving up at the Kings Head, who again laid on a smashing, if fiery curry with rice and tortillas and a much needed yoghurt dip, all for a donation to the RNLI.

We stayed around for the Rockabilly band which meant that by the time the OGA crew got back to the TSC they missed the bar by 5 minutes.

We really want to support the Kings Head but with the smaller numbers attending it does make it tricky.

Many thanks to Sandy Miller for the photos – http://sandymiller.org/