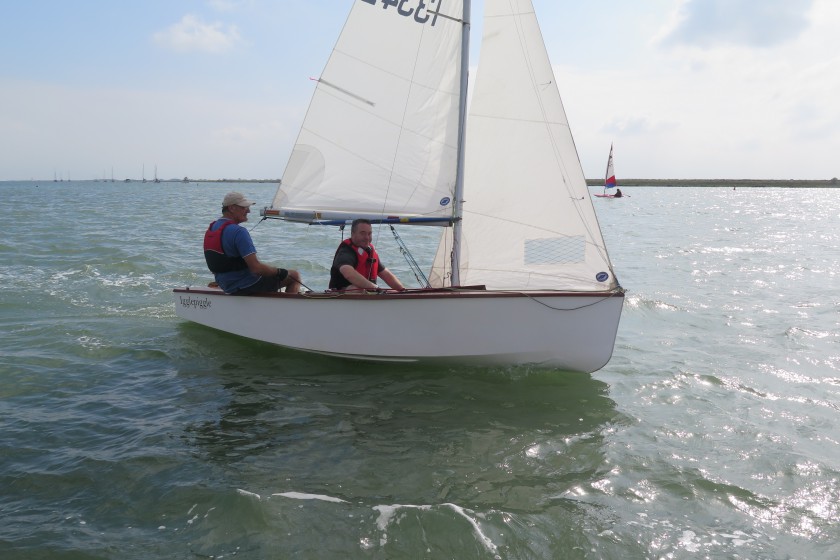 As the TSC website has a ‘Meet the New Cruiser Captain”, Andy B suggested we should also have a ‘Meet the Not So New Dinghy Captain. As I’m an out-of-towner too, though not quite such a long way, this seemed like a passable idea, so here I am.

Originally from the North West, I’ve lived in Chelmsford since 1979, but with substantial periods overseas. Sailing arrived in 1992, when aged 41 I was about to be posted to Nigeria. Lagos really only has two (legitimate) activities for ex-pats, Golf and Sailing. I can’t abide golf and knew nothing about sailing, so I persuaded a friend to teach me. This comprised one weekend in a Wayfarer at Blackwater Sailing Club, after which I was left to my own devices.

Lagos Yacht Club, founded in 1938, was and is a pretty big club and at the time had Sparkman & Stevens Lightnings (a sort of 19ft giant GP), Ospreys, GP14s, Hobie 16s, Lasers and a few Shearwaters. My predecessor in the office had a GP that I was expected to buy, so that was that. My obsession with GP14s commenced there, with a capsize before the start of my very first race.

That first boat soon gave way to something a bit newer, a Don Marine Mark 4 (still a series 1) as originally supplied to the Nigerian Navy Sailing Club. She came with a catch though – she’d been capsized and left at the bottom of a creek for 6 months. However, restored with the aid of the club fibreglass man, 12941 served me very well for the next 8 years and I served the club with a variety of roles.

Returning to the UK in 2003, at a similar time to a mate who lived near Dunmow.  Not fancying Dinghy sailing in the UK weather we bought a Sonata together and had a go at racing it at West Mersea for 3 years. Disaster! We couldn’t make it go at all, never finished a race. Never offered any help either and somewhat disillusioned we sold it and sailing stopped for a spell.

However, I’d remained a member of the GP Class Association and lo and behold, there was an article in the magazine about GP14s at Tollesbury. I’d never imagined GPs existed  in this part of the world and here was an opportunity not to be missed. So, since 2010, here I’ve been, with a boat sourced from familiar territory in the North West.

Plans for this year were discussed at a meeting at the club on 15th Jan and there is a separate note on the web about that, so I’m not going to repeat any of that, except to say that after a number of years of declining numbers my prime objective is to get more people out sailing.

So – all the best for the New Year, and hope to see you all at the Mersea Breakfast.